This is the part 2 review of the previously posted Master Grade model.

Previously I talked about the MG-ish parts and building of this model, now let's see what are the points which I found not so MG-ish. 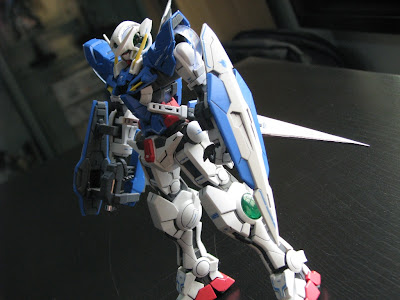 One of those MG I have where it is not back heavy. Reason is because Gundam Exia only has the GN Drive at its back. That's one thing I like about AD era mobile suits as compared to the overteched Cosmic Era mobile suits which cannot stand on its own. 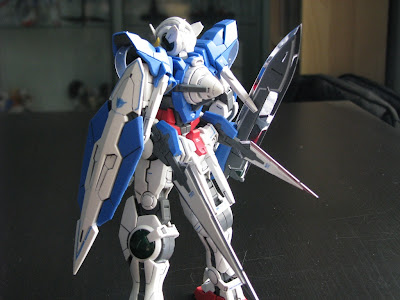 But this doesn't mean that Exia can stand on its own steadily. Centre of gravitiy of this model is still high because of its weapons on its arms. Having the GN blades attached onto its waist doesn't really help in bringing it down. 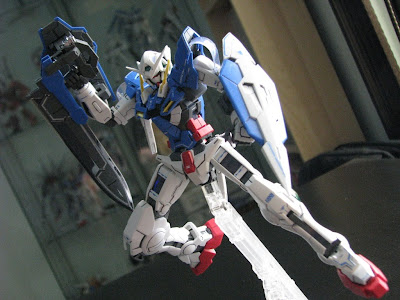 That's because of its double ankle ball-joint implemented which tends to be loose. So most of the times a stand is needed since it's rather unstable to make it stand on the ground.

The shoulder armors tends to be floppy too because it can't be slotted onto the shoulder peg which I thought it could. So it's merely connected to the arm with the GN hologram strip and tends to move around. 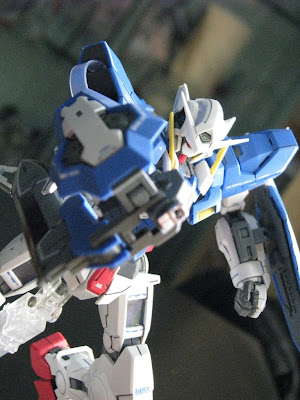 GN sword is rather stiff, which can be either good or bad. The handle tends to slip off from the hand when GN sword is converted to the pistol mode because of the stiff joint. Therefore there are few points to be held tight during the turning so that it won't pop out. 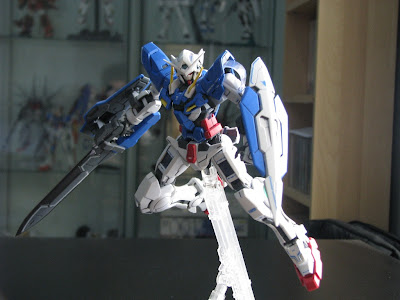 The GN sword can be slided aside so that the left hand can be free off to have a second handheld weapon. Quite a bright design but not practical - because the connection on the GN sword on the arm isn't strong and the sword may fall off easily. 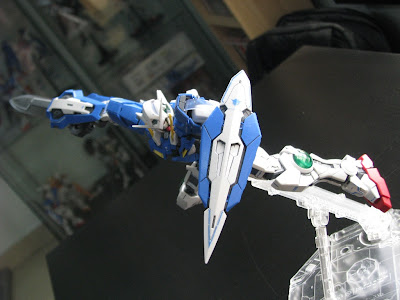 You can make thousands of poses with the massive GN sword but it is not advisable to freeze the pose for a long period due to its weight. I've seen a lot of people complaint about the loosen joints on the left arm because of the sword. 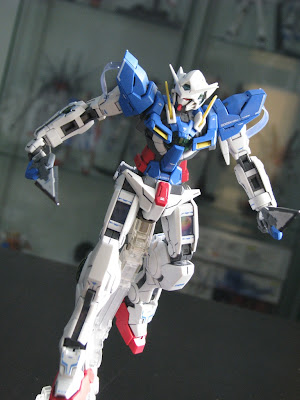 Not so flimsy GN blades. Having chromed plated edges is weird but nonetheless it still added some coolness on the weapons. Attachment of the blades onto the waist is a good design but anyway it is not as strong as it supposed to be. If I still mount them there and move it around, it is just a matter of time to have broken parts. 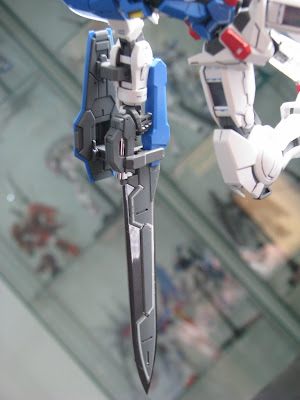 Some close ups. The GN sword had became shorter, wider but not as flimsy like its 1/100 counterpart. The stripe stickers applied adds up more details for it but it was very difficult to apply unless it is cut into a few parts. 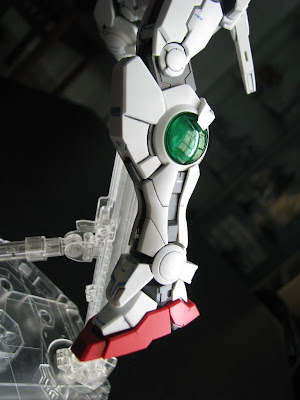 There more details on the legs, which has 3/4 inner frame instead of a full frame. That somehow lowest its weight and the lower part of the model tends to be light.

The GN condensers looked much detailed in this way. Having the sticker inside, a clear part in between with fish eye effect, and a green clear part on the outside which has the same detail of the sticker - making the condenser more realistic in this way. 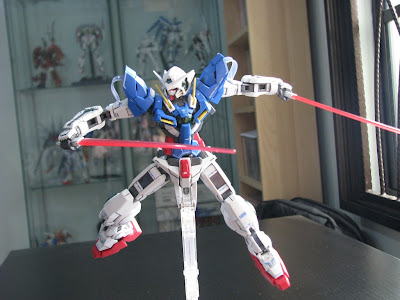 Seems that I make more negative statements more than the postive ones. Having said so, nevertheless it's still a very detailed MG model worth buying. With a backpack free design this MG is enough to twist around with for the whole day. 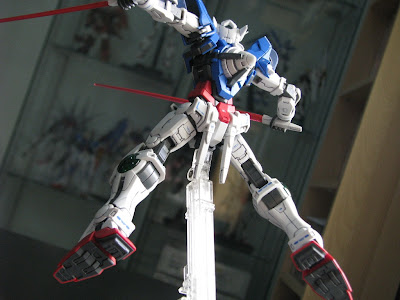 Still haven't get the batteries for the GN drive. Next review will be on the Repair Mode.

That would be 1 more week later, when I go home for my another 1 week holiday.
Narrated by Mike at 13:46

Question for you, should I buy guntank? cus it looks reaaly cool xD

lotsa ppl complaint on it huh? that's the whole purpose of writing a review right. letting ppl know what are the problems to be expected before anyone buy them.

MG Guntank, it's quite a good buy bcoz it's the only MG without legs (apart from zeong and ball). The LED cockpit seems cool too.

Any idea about the clear parts for guntank? sure come along with it? because that seems good in showing off the frame. Conclusion, buy only la. think later.

yeah, but the caterpillers seem like hell to build >.<

I don't really like the clear parts idea like for PG OO and red frame, but i saw the clear frame guntank and it looks awesome =D

are you buying it? cus if you r i'll wait for review

hahaha cus they were like saying exia is the best MG yet before its release... mana tau so many problems -.-

hell lot of parts for the caterpillers huh. I'm quite fond of the clear parts, i like them. But i guess everyone has his own preference anyway.

Nah, I'm not gonna buy the MG guntank. So far I haven't buy any Non Gundam gunpla yet but the guntank isn't gonna be in my list anytime soon.

So far my pending list would be the HG00 00 raiser + GN sword III, HGUC Unicorn, HGUC Unicorn destroy mode. Will get them end of the year.

Will get HGUC Hi Nu too. Won't be getting any MG. Even the MG Blue Frame Second L revise. I like it, but I don't like the anorexic revised version. Prefer the older design. Wait for MG Red frame, because can't afford the PG...

LOL mg bLUE FRAME is a definite on my to buy list, partly cause it's my favourite MS xP and partly cus i was disappointed with the NG version...

LIke you said everyone has his/her own preferences... I'm not too fond of HG's hehe and I kinda like the anorexic versions xD

so you prefer the anorexic version? Fatter legs like the PG Red frame looks more tanker to me. This MG blue frame is having one of hte heaviest backpack so far and yet has the slimmest legs ever, so contradicting.

I don't know la, still struggling to think about it. Because the 1/100 Astray Blue Frame second L was my first 1/100 model, and I got back to gunpla again was because of Astray Red. So i'm quite fond of astray series... wait for MG astray red then.

Quick Question... Did you use pens to detail your PG Strike? If so nice job.

to anon, yes i used the gundam liner for the panel lining and gundam gold and chrome markers for the detail ups. these steps help a lot.

No matter how much I've seen this MG Exia in other blogs, I always love this kit.