Number 3 of the holiday learning outcome! Actually there is no number 4 onwards to write about so I guess this is it.

David John never fail to organise some easy competitions to win some gundam prizes. I have so far won a Revoltech and a small gundam from him. That was twice. I wanted to hit for the third time so I joined another photo taking contest held by him during the holiday

The rules were simple. One model, one shot, with photo descriptions.

I decided to take my favourite model, the Gundam Fix Figuration Metal Composite RX-78-2 Gundam which I have bought during early of the year for the photo taking. 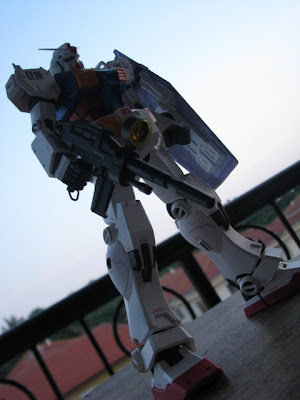 During then only I realised that I had yet to take any serious photo of it although it was my all time favourite among all my close to hundred models collection. It was my first metal composite and I have to love the weight of the die cast metal parts, and the perfect painting. 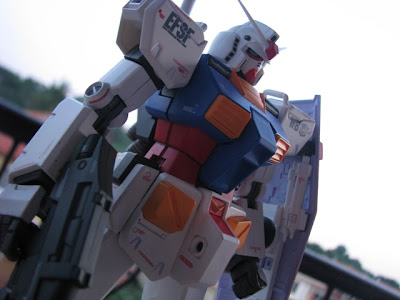 Trying to imitate the view of the 1/1 scale 18m tall Gundam statue in Japan, with the aid of sunset I took a few shots and selected one of it to submit. 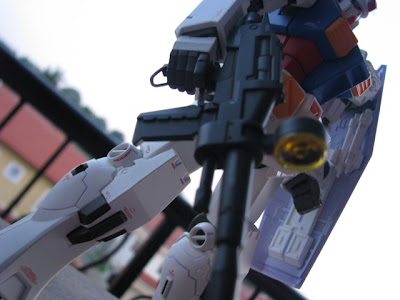 In the end I have chosen the low angle photo (below) for submission. The light of the sunset was just nice and the angle was good as if the observer was looking up onto the 18m tall Gundam statue. 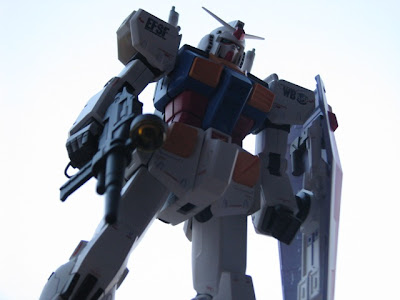 I was shortlisted in the final 7 out of the 30 entries with the lowest mark of 81% among the finalists...

John's comment - The photo from Mike, I think it's just plain lovely, the old fart RX-78 Gundam is not my favorite but that photo seems to be lovely.

Anyway, although I didn't win the contest but at least I got do take some photos with my father's camera during the holiday, it's been awhile since I last touched the camera.

PS: Have just bought 3 more Gundam Fix Figurations this week, that marked the 10th GFF I have in my collection! RM650 gone...
Narrated by Mike at 21:27

At first bought GFF #0019 Gundam Mk-II and GFF #0027 Blue Destiny from batu pahat. And then days after that GFFN #0044 Full Armor Unicorn Gundam was released in KL then i asked my elder sister to help me buy. 3 GFFs at one go, first time in my history. Getting poorer and poorer...

That's the whole point Z, if only the GFFMC eyes could light up with some gas coming from the chest... haha

WOW I did not expect it to be so exp but this is a gd figurine so i think is worth it!

Hi, it's Zack here from gunplapricehunter and just want to let you know that we have open a new online gunpla pricing site.