Continue with my learning outcomes during the one week break that I had this month, which were;


Now, the second one.

I took part in our university's art competition for a few times and I have never win any. I just realised that I have joined during year 2006 and 2007. Once I went to Seremban I have totally lost touch with the competition and missed year 2008 and 2009.

So, this time my youngest sister was part of the committee and according to her, the art competition this year themed "Emotion Unleashed", and under the "Drawing" category the participation was not great.

The committee members would need to get at least one entry per person so she asked me for the favour. I, was totally upset with the competitions, did not intend to join since my artworks were never been appreciated before during the past competitions, decided to give it a try. And I came out with this; 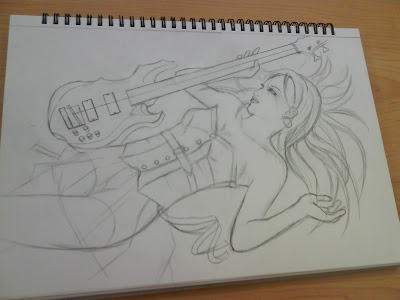 Looked familiar? It's Bassist Doris Yeh (above) from Chthonic. The photo was taken for her endorsement for ESP F-series bass guitar.

Spent one night for the sketching and I got some feed backs from people.

Tuck Lam: This is good Mike, but not up to your standards the last time I saw! Must go mountain and meditate train a bit.

Ying Ying: nice! Glad to know you're back at trying a hand at art, don't give it up mike!!

William: yes you do man~!!! you always do...which is the motivation for you to even draw them,,go check your art album, and see if there are any guy pictures there? or girls that wear plenty of clothes~?! ahahahahah rahsia bocor

Vanessa: I am impressed. Mike can draw! And here is one hell of a reason I won't be summiting mine to the competition. lol

Jin: yes mike... i fully agree with u! clothes mar the essence of a woman's beauty :P


Yes, I only draw girls, and must be either gory or gothic. Too much of influence from gothic metal since college days I think.

And hence, another night I moved on with the inking, inked until the next morning and this is how it turned out to be. 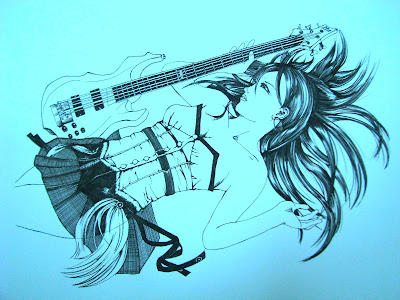 The number mistakes done was way beyond my expectation. I totally miscalculated that it was physically to draw lace by hand, so i screwed it up. Put aside the minor mistakes, I think overall it was still acceptable for me.

And for the caption, on the same night I came out with a few lines but I was not satisfy with it.

A few days after that I wrote a few new lines and got my housemate to correct my grammar and vocabulary, and ultimately it turned into;

"Dressed in grieve,
Under the sky, she lied,
Gazes into endless horizon,
In envy she writhes,
Eyes drowned in emotions,
With 5-string heartbeat,
Throbs, unleashing the buried
In the waves of sorrow..."

Even more complicated! And most of the people could not get the idea on what I was trying to convey. But it's ok. Would rather let the people to have their own interpretation.

With the last line I titled this artwork as "In the waves of sorrow". Sound very melancholic, as my style, always.

In the end, I did not win the competition, because the judge dislike sketches. Yes, he dislikes sketches, and that was why I got a very low mark.

As usual, the art competitions held in the university never fail to disappoint me. I don't mind not being picked, but I totally disapprove the reason of losing was just because it was not a painting but a sketch. Hey, two of my batchmates had won with pencil sketches back in 2006!

I thought inked drawing was way more technical than pencil sketching, because it is not erasable. And what for I spent hours of drawing the hair with a new set of French curve, and the super hard to draw bass guitar?

This marks the final time of me joining and losing the art competition in our university. That's all, stop degrading my hard work, really.

But as long as the condition allows me, I will never stop drawing...
Narrated by Mike at 20:56