Clinical examination is at the 5th week of posting. And the day after that we will have our theory paper for both obstetrics and psychiatry postings.

Speaking of obstetrics, today I received 2 letters from the academic affairs department.

For the first letter I was specially summoned. Got an enveloped letter from the dean of clinical school. Seemed that what happened to me last month in the university has came to and end.

For the sake of my profession, I swear I won't repeat my mistake again. 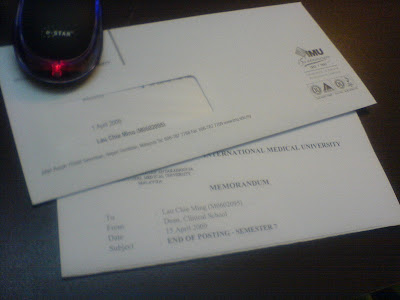 As for the second letter, it was our obstetrics posting exam results.

I totally forgot about the exam result that will be out this week. Once I learnt about it immediately I dashed to the office to collect mine.

Passed. Lucky. Did 1 grade lower than my surgery posting exam though. But it was still ok, at least I passed, and I knew that I didn't do well in the exam anyway.

By the way, I heard that the highest grade scored is B+. And again, I scored the 3rd highest grade. Why am I always at the 3rd rank? Improvement is really needed.

It's officially more than 1 year and 4 months since I moved into his new house. Overall my room hasn't changed since the day I moved in. The only change is that things in my room keep getting more and more in numbers.

Audio CDs, books, comic magazines, and of course, my collections - taking up each of every remaining space I have in my room day by day. 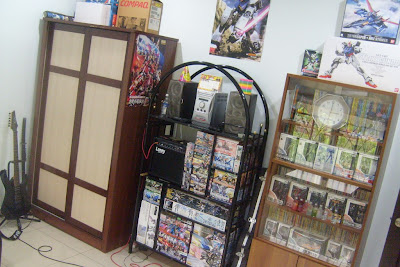 Now, this is the first corner. The door is at the right of the photo above. Wardrobe with no clothes inside, because they are at the changing room at ground floor and most of them are in my seremban room.

But anyway, I don't have much clothes myself. Ibanez GRG270 sitting there to accumulate dust. I didn't bring it to seremban, I can't play it there anyway because I'm not staying alone. 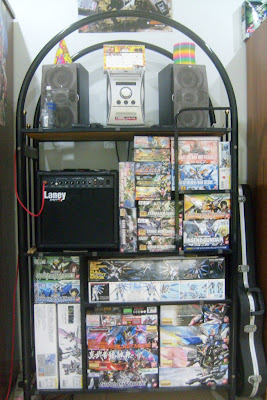 TV rack which I use since I was, 8 years old? TV rack with no TV but replaced with a guitar amplifier there. The min Hi Fi on top is my second set, it is already more than 6 years old. Almost 95% of the times it fails to read my audio CD. Naomi's birthday hat is on top of the right speaker. Yes, I'm still keeping it.

The remaining space of this TV rack is fully occupied with the gunpla boxes. Can keep up to 33 boxes currently, without considering the "box in box". Extreme space saving way of keeping the boxes. 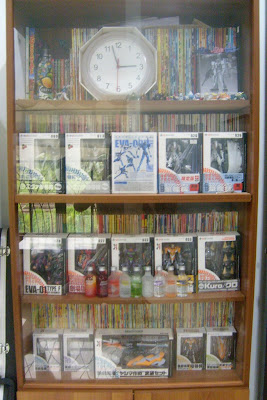 I have some gashapons at the top compartment. 15 Revoltech models occupying the remaining compartments. There are 9 baby vodkas sitting there too. I have tried the peach flavour ones and it sucks. 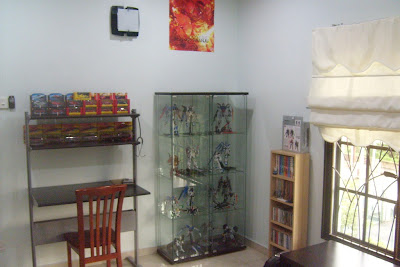 This is the second corner of the room. The study table, glass cabinets, DVD rack and coffee table were bought from the same place. Chair stolen from the dinner table set from the common room. My favourite office chair is now in seremban. 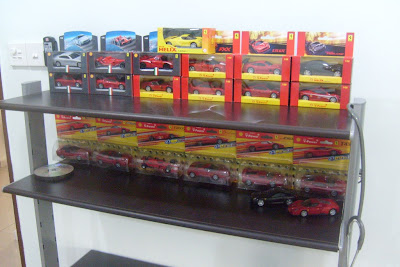 I collect most of the Shell Ferrari cars of all 3 generations. But I have missed out the latest 599 GTB Fiorano, because I have two of them of the previous generation so I skip this one since they are both the same car, just with different gimmicks. I'm also not bothering the yellow model of this car which only can be purchased through the Helix engine oil.

The yellow Enzo which released previously with Helix tie-in also sold together with other cars this time so I felt a bit cheated. Therefore I'm not going to get the yellow GTB this time. Other than having an extra second generation's GTB, I also have an extra first generation's Enzo. That means I have 5 Enzos of different colour and specifications... Oh yes that's my second stethoscope which I'm not using. 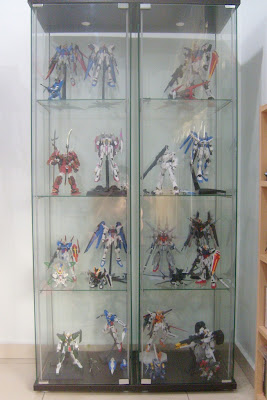 These glass cabinets are already one year old. Only the Master Grade models, a few 1/100 scale models and a few SD from Stargazer series in there. Of course, the newly completed Perfect Grade in there as well, but without stand and Aile backpack because it's too big to get fitted in there. The rest of them had already underwent "back to box" ritual.

Look quite empty if compared to other people's ones. But I would rather let them spaced out so that it won't be too overwhelming. 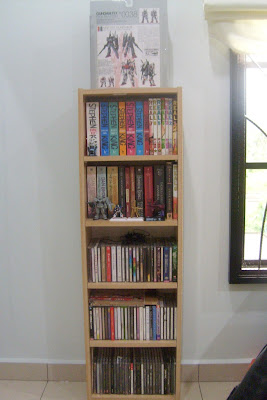 DVD rack with no DVD inside. First two compartments from top are books which I bought during college and since semester 4. I still haven't read a few of them due to time constraint. G.F.F. Mk-II's box is sitting up there where the model is currently in my seremban room.

The rest of the compartments are the audio CD I bought since high school until now. The number grew at its peak during my college period, where I started to collect japanese and korean CDs, almost every week I bought 1 CD from Pyramid. Some times even more. Now I'm slowing down, because audio CD nowadays come with DVD and they could easily charge you more than a hundred ringgit. By the way, there are like 70+ CDs there! 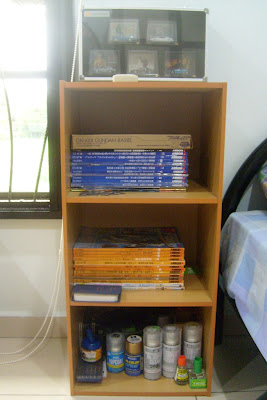 Another book shelf with no books inside but Dengeki Hobby magazines. Bond's car collection in a box from Shell is sitting on top. I started to collect this magazine since 2007, but I've missed February 2007, March and April 2008 issues though, would like to get second hand if there is any.

The last compartment I have my gunpla modelling tools in there, mainly the spray cans. Not so healthy to put beside my bed huh.


It's quite weird that why don't I have my study material in my room? Reason why is because most of my medical books and notes are currently in seremban, and the rest of them are at the shelves at the common area outside my room...


That's it, my lair. Really miss home. Studying in seremban is quite stressing.
Narrated by Mike at 20:33 13 comments:

This took longer than I thought. I planned to finish this during the semester break. In fact I did, but for the Strike Gundam itself only.

Spent 2 days to continue building the Aile Striker backpack. Yesterday started to apply the stickers and herein I declare the end of this project. 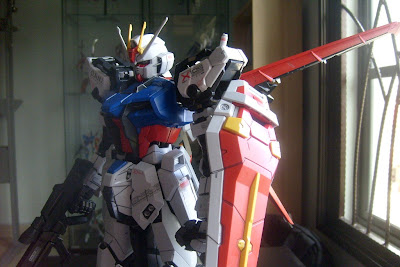 My toughest work so far. Started since end of December last year, and after 3 and a half months of working and delaying and finally it is completed.

Master Grade models will usually take me around 1 week, if I work on it everyday. But this Perfect Grade model is way too complicated to build thus it can't be compared. Plus I work on it on and off, due to our tight schedule in the university and in the hospital. 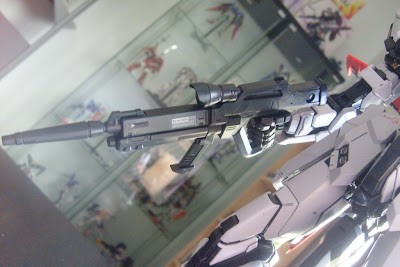 So this morning I woke up and get ready for the final step - top coating.

Removing the armor pieces from the frame piece by piece could be a pain. Extra attention needed because failure of knowing the orientation and direction of the attachments can easily break the pieces apart, if strong forces are being applied. 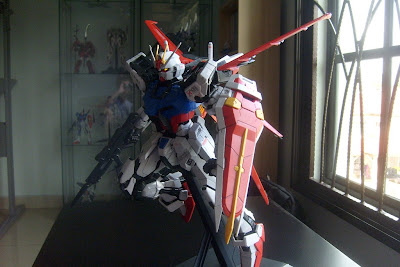 Unfortunately there were some casualties where I broke 3 pieces on its poles. Poles in holes attachment is the worst. If there's a slight deviation of force, the pole will just stuck in there with the broken piece on your hand and guilt on the other hand.

Semi gloss coating for the armors and weapons, dull coating for the internal skeletal aka the frame. I should have get a can of gloss coat as well for the chrome plated "Grand Slam" weapon, but I guess that is not worthy so I just skipped it. 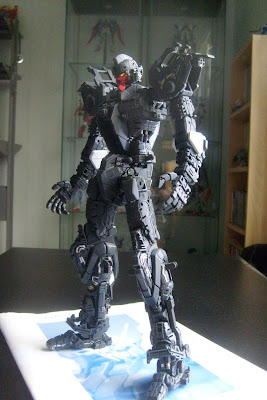 Removing the armor pieces to reveal the panel lining and markering I have done long ago was quite satisfying. I really spent a lot of time to marker the inner frame especially the hydraulic pipes. I only used the markers without the aid of brush so it was a great pain for me. 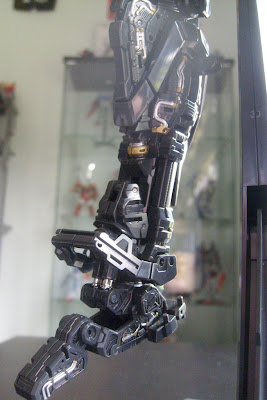 Panel lining the inner frame was a pain too. Not only I was lining the hard to reach parts, when I think of those details will be covered by the armor pieces, it somehow gave me the feeling that it is not necessary to ink them.

But anyway, these details will only be seen if you cast the armors off. External detailing isn't as impressive as the interior ones. 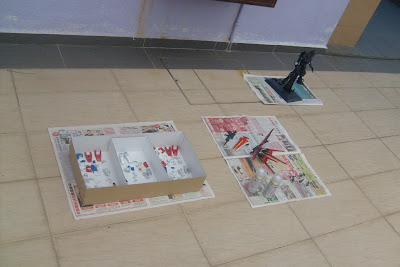 Alright, after an hour of removing the armor pieces, time for coating. The weather was not that great as I expected. The sun went off and wind started to blow. I had to find a spot outside my house where wind speed was minimal.

It got me worried. I had to wait for the wind to stop blowing, and take that instant of seconds to spray before the wind started to blow again. 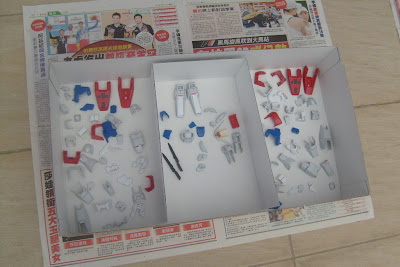 I placed the armor pieces in order so that I won't confuse with the left and right. But anyway this mobile suit's design is somewhat symmetrical so it doesn't matter if it got mixed up though.

Left at left and right at right. Middle compartment for the pieces from the torso and waist. Surprisingly huge number of pieces to be arranged before spraying. 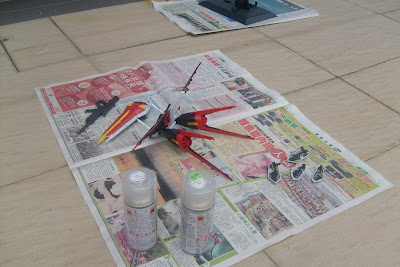 Wanted to hang the Aile Striker to spray it but in the end I just placed it on the ground to spray, and flip it over to spray the part beneath.

Same goes to the beam rifle and sheild where both sides need to be covered. The inner part of the skirtings were well markered too thus I turned it over to cover those parts with dull coat too. 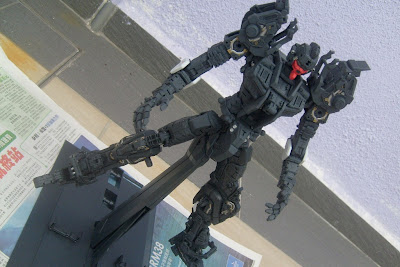 For the frame, I just place it on the stand and spray. I somehow forgotten to cover the medial parts thus the inner lower limbs and shoulder were not well coated. Too late when I realised it.

I sprayed the stand as well at the same time with the dull coat. I have a big issue with the stand where it comes out easily from the base thus losing its stability. The model might just fall off if it gets too lose. What a pain.

By the way, I think I am addicted to the toxic fumes of the top coat. 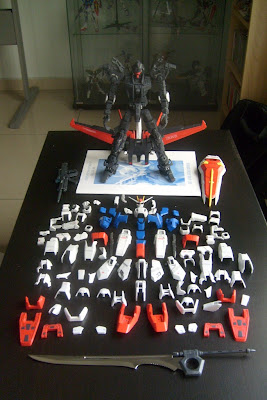 After about half an hour of spraying, I brought them back into the house and let them settle down. Until now, I am not sure how long should I let them untouched so that the coating will dry up completely. However I still can't help it and touch them here and there, in the end having coating particles on my fingers.

The number of armor pieces was overwhelming so I did not bother to arrange them in symmetry while I took the photo above. It still did not fail to impress me anyway. 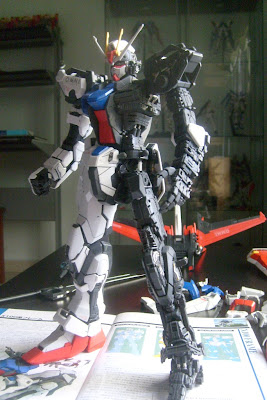 Applying the armor pieces back to the frame. I took this shot inspired by dannychoo. But the way I shoot it was not as great though. 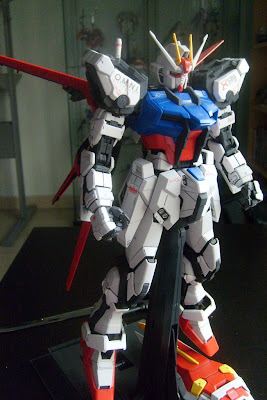 Perfect Grade Aile Strike Gundam, assemble and completed by a casual collector. Although I did not apply any extensive skills like seamless, sanding, or air brushing, but I am quite satisfied on how the final product turned out to be with my limited modeling skills. 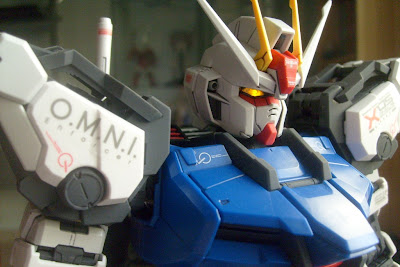 Stupid camera died again and my photo shotting stops there.

Will continue the review next time.


Overall: 5/10 - Not something that I could collect. Its price is the biggest issue.