I had been thinking again and again, should I buy the PG Skygrasper + Aile Striker. But without it my PG Strike would be so incomplete.

Eventually, after almost 3 months of purchasing the PG Strike, I bought this PG Skygrasper + Aile Striker early of this month.

I hope I will not spend for gunpla anymore in this short period of time, at least wait until I finish my semester 7 exam, will I? 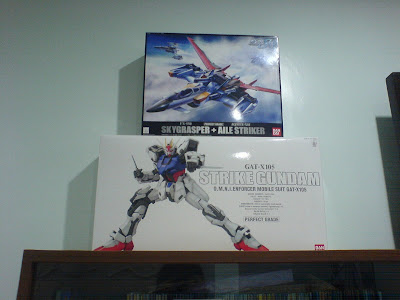 I have actually assembled the top of part of the Aile Striker during the day after I bought it. That was during the Sunday before we started our obstetrics posting. Once posting started we don't even have time to sleep, so of course no time for gunpla.

Thus I brought it back home and placed it together with the PG Strike. My only (set of) Perfect Grade gunpla. Would be the last.

3 days after I bought the PG Strike only they announced the release of PG Astray Red Frame, which drove me completely crazy. Astray Red Frame was the one that pulled me back to this whole thing about Gundam again, so of course I like it more then any other mobile suits!

Too late. But anyway, being a 18,900 yen Perfect Grade kit which costs around RM700, same as this set of PG, I guess I could only get it after I started working. Not now for sure. 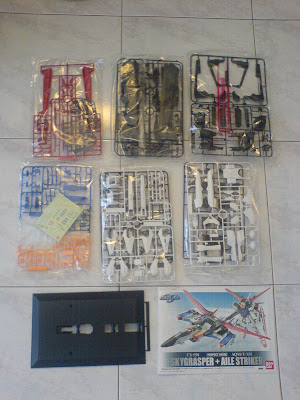 I did not take much picture of this kit. It is a non mobile suit gunpla I have bought so far. I was just 3 months late and the price got raised for RM10. Damn!

Box is about the same, but slightly thicker than a Master Grade kit box. Not many runners in there, but the runners are all big due to the huge size of the pieces. 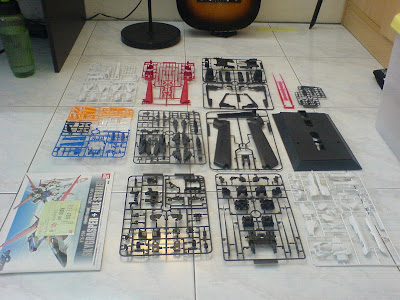 The above 2 photos were taking in my seremban room, that's why the background and floor looked different.

Will continue assembling it after I finish my exam. A can of semi gloss top coat was bought too during the same time. So semi gloss coating for the armor and dull coating for the inner frame, I'm not sure whether has anyone tried that on a PG before, but I think I'll just do it anyway.

By the way, just like anyone else, I bought this kit is merely for the Aile Striker backpack. I won't be assembling the Skygrasper unless I have a long, long break, which is not going to happen in the near future. 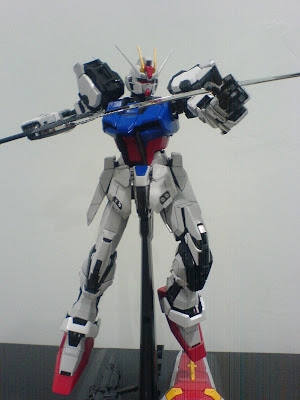 A slight update for the PG Strike. It is too huge (~35cm) to be placed in the glass shelve if it's on the stand. The stand only come together with this PG Skygrasper + Aile Striker, so if someone who bought the PG Strike without the said kit then aerial posing this fella would be impossible, unless you DIY one super hard and durable stand for it.

I doubt that the stand is going to last long. Because the PG is really, really heavy.

Work in Slow Progress, will be continued.
Narrated by Mike at 20:14

all these happened before our serious talk! but anyway with out the backpack it's still looked incompleted, quite an eyesore. but this PG will last me for quite sometime. I guess.