Not easy to get this. I was surprised to find out that Kinokuniya actually brought in this book from japan. It's a catalogue from Revoltech which includes the previous hundred of releases of the action figures since 2006 until 2009.

I have 18 of the releases, almost all are from the Evangelion series.

The point of this book is that it comes with the Evangelion unit 03 model which is not available out there, only come with this book. What to do?

So I emailed them to confirm the availability of the book. The next day I called them and shortly after that I ended up in the train to KLCC. 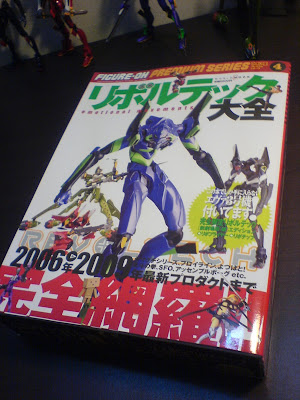 Journey from Seremban to KLCC wasn't too bad after all. I set off at 4.15pm and managed to get to the bookstore at 5.55pm. Just nicely before 6pm where they can only reserve the book for me until that time.

Got my copy, happy, and made my move back.

But journey back to Seremban from KL wasn't that smooth. Supposed that I could reach home by 8pm, but due to the incompetency of our local transport system, I only got home by 10pm. 2 hours wasted because the train provider decided to cancel off 2 trains consecutively during the peak hours. 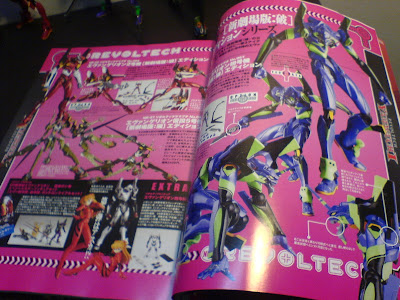 Anyway, I'm not certain whether I should be happy or sad for this. Yes I did get the super limited book and model, but in turn I wasted 6 hours of my time.

By the way, the copy that I bought was the very last. I got the email reply from them after I bought this and apparently it is sold out locally and as well as in japan. 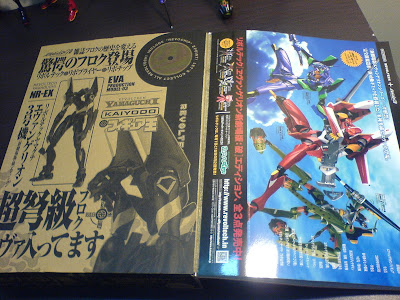 Back to the book, well, it does look like a magazine but with a box sticked onto it. I can't seem to detach the box from the book. Maybe it was adhered in such a way so that people can't separate it and sell it separately. Good step. But difficult to read the book with the box on. 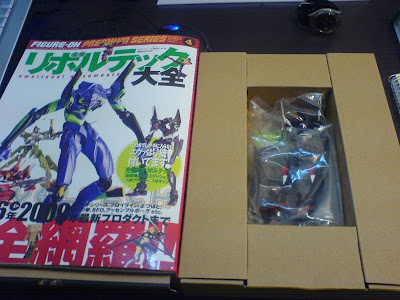 Pulling out the compartment from the box and this is what you will get. This so called free revoltech did not deserve a box, but lousy plastic packaging only. How sad.

But the box is strong enough to protect the parts. And the book I got was good in condition so I've no complaints with that. 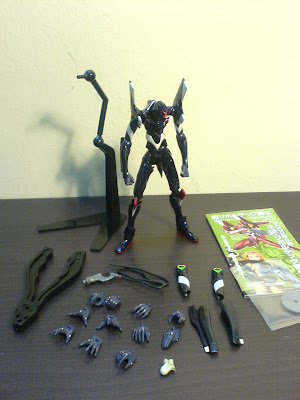 Unlike the previously released unit 01, unit 02 and the provisional unit 05, this unit 03 comes with rather simple optional parts. 11 hands, a pair of elongated arms, umbilical cable, stand, infected cockpit and a 2 point revolchip as well as the clipper.

The clipper is a bonus to me since it's very helpful in removing and adjusting the revolver joints which appear to be tight among most of them. 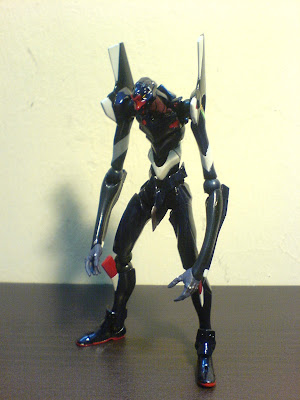 With the elongated arms it looked more angelic like. Appeared when the unit 03 attempted to kill unit 01 in the movie. Oh well, a tragic model.

Actually among all evangelion units, the one I prefer the most is the unit 03. Not only the dark color scheme, the head design is also a plus point for me. Unit 01 is good too, but maybe it's too famous so I'd prefer this unit 03 instead. 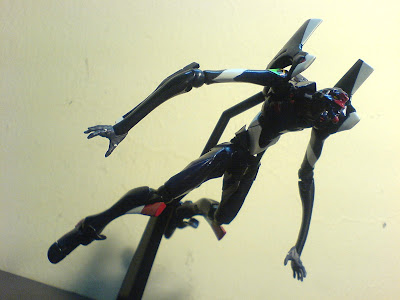 The stand given is more articulated then the stand from the previous releases. The thing is that it is attached to its back where the umbilical cable is attached, so there's only one to choose, either the cable or the stand.

It's still better than the old models where the stand is attached up to the ass. 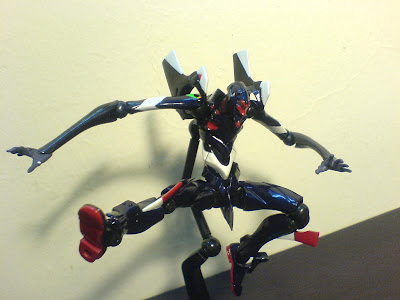 Painting and finishing since the June releases are well improved. Unlike the old ones where the color are the moulded colour, now this NR series the whole model is painted through out, and finished with a layer of glossy coating.

This makes the old models rather dull. By increasing the price from 1,995 yen to 2,400 yen, I guess it's still worth it because of its high finishing, more extra parts and bigger box. 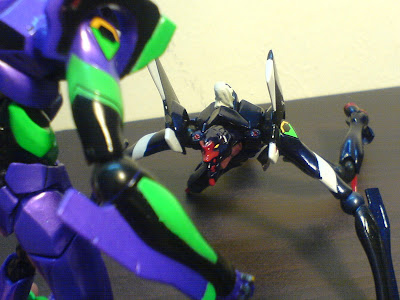 Alright, this is the part where the infected unit 03 tried to kill unit 01. The plot of the manga and anime were different. The pilot of unit 01 knew that his friend was inside unit 03 and he tried to save him out from the infected and berserked unit 03. 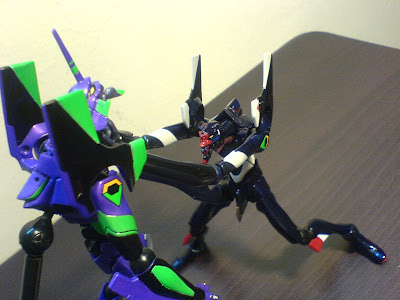 By rejecting the order to eliminate the unit 03, pilot of unit 01 didn't get the control of the unit and got taken over by the dummy system, and he crushed his friend in his very own hands.

Pilot of unit 3's girl friend was preparing the breakfast for him while he was suffering from multiple fractures and multiple organ rupture and died in the cockpit. 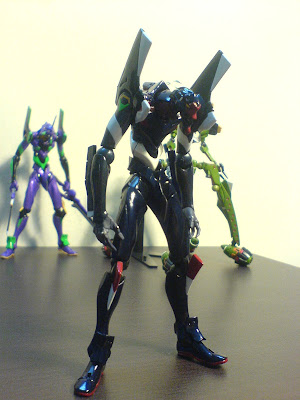 Evangelion models are not mechas nor robots actually. In fact they are life being made using the genes from Adam and Lilith captured by human. They are, in fact, a living being, covered with armors as to restrict their potentials.

And their genetic components are 99% identical to human. Because we are too the off springs of Adam and Lilith, as the 13rd Angel who lost our Absolute-Terror field. 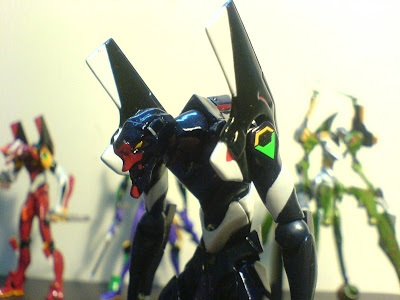 A very complicated plot huh? In fact I'd say Evangelion has the best story so far among all the series out there. But somehow, too complicated to understand. I didn't get a single clue while I was following it during my primary school days.

The new movie, "Evangelion 2.0 - You Can(not) Advance" was out in japan last month, guess it will still take quite some time to be released locally. Waiting for fansub, yes.
Narrated by Mike at 13:03

Seen your shout at Ngee Khiong and came over.

I bought this guy too.
Got it at Kino too, struggled with the decision to buy or not.
Bought at last as I don't want to regret :P

Somehow I feel that its expensive(at least its more expensive then 01 and 02) and it doesn't come with weapons plus the book looks really thin.

Compared to the limited 04 which came with shield and gun. Too bad I missed that one.

I have yet to open up my copy.

hey you bought this too! lucky. it's quite worth i think. considering i bought unit 01 and the rest for RM95, this fella here with book was just RM108. I don't bother much bout the weapons since unit 03 didn't have weapons at the first place in the story, lol. Erm, the limited 04 you mean is the miniature or the one from pachiko with unit 01? don't think can get it around her though.

Its the one with the pachinko book.

But in the coming other 2 pachinko books they will have Asuka then Rei mini Revoltechs.

Kind of tempting me :P

eh mike make one version...no hands legs and face.since eva 01 ripped it up to pieces in the end

iron2000 - the one from pachiko one is the repainted eva04 + lance and eva 01 with ESV shield and positron rifle right. is it possible to get outside jap? i'm not so tempted to get that since i already have the normal versions, haha.

chan - you reminded me. can use the limited mass production model's battle scared parts to do that scene actually.

I was told it was sold out when I went to get the 04 book.

Maybe you can try to pre-order stuff like this(book+extra) at your local Kino?

ya, now i learnt that i can actually call up kinokuniya here and reserve any upcoming books. i might reserve a copy of October's Hobby Japan for the XN-Raiser, but I don't have the 00 raiser yet haha.

good revo collections you have?
can you write the book's ISBN number? thanks..

Likewise, I too have bought a unit-03 and its amazing. My only regret now, seeing as they won't release a rebuild model of unit-04, is not buying two of these so that i may repaint one of them.
Yes there is a rebuild of unit-04 but it is a "miniature" and has the body mold of the old eva revotechs....

hmm, that miniature unit 04 was a magazine exclusive too. i didn't bother to buy because i had no time to travel down to the japanese book store again and on top of that, i don't think the high price worth it... i'd rather spend on awakened eva 01 and eva 02 beast mode instead.