The recording was finished officially last Saturday. I had recorded the acoustic guitar, rhythm guitar, and bass guitar previously, what were left were the lead guitar and the drums.

After another extensive practice of the lead guitar and air drums at home, I went to the studio again for the recording. 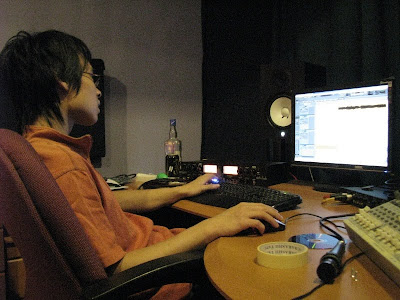 During the first day of recording, for each instrument that I recorded, it took me about 1 hour to 1 hour and a half in average. That included the retuning of the instrument and conversion of the scores and tab.

For this lead guitar recording, which was the hardest, it took me 1 hour and a half to record too. Surprisingly fast.

I have to say this guitar solo "Intermezzo Liberte" by Arch Enemy's Michael Amott was the hardest song I've played so far. It was hard in terms of the techniques involved, such as vibrato, slide, pull offs, extremely fast riffs and the most importantly, the bends. If the other instruments were said to be in the "easy" level, then the lead solo would be considered as "intermediate" level. I'm not yet in "expert" level yet, which is almost impossible for me to be in since I don't have a primary instrument to concentrate with.

The saddest thing for this recording is that, we were not able to record the drums for this song. That was because the drum skins are not changed and the drum set is not yet set up. To set it up it, tune it, set the 8 condenser microphones on will definitely be time consuming.

Since recording the drums will be out of the budget, therefore the drums for this song will be replaced with drum machine...

I was very, very disappointed with that. Not only I've practiced hard for the drums, and I wanted to badly to record the drums for this song as to make it into as "one-man-band" as possible. But I guess the circumstances didn't allow me to do so. 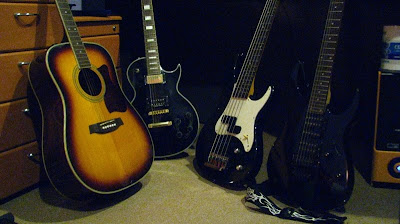 Therefore I only managed to record most, but not all of the instruments.

Parts which I was not able to record were the keyboard, will be done digitally, as well as the drums, will be done using the drum machine. Sadly. 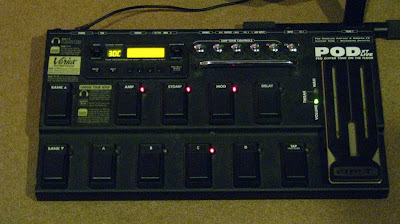 The pedal wah was in neutral during the starting of the lead and it was operated during the fast solo. It added more complexity and sound for the solo. And it is something which I'm not yet master with to control. 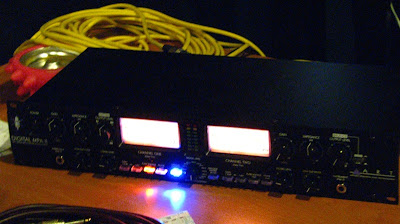 The guitar sends its output to the effect processor, and then to the pre-amplifier. This pre amp is a tube pre amp! It sounds totally different from a digital amp. And this tube pre amp only takes a few seconds to warm up.

The signal further travels to another pre amp, then only to the CPU of the computer. Recording of the bass and electric guitars are all done within the control room itself. I only used the live room to record the acoustic guitar part. 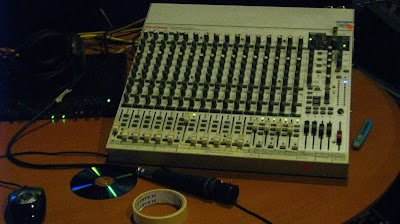 Somehow this song has done recording, what are left is the drum machine and mixing part which will be done within a week later. Now I have done my part, and what is left for me is to type out the elective report.

I have to idea how to type it. Any word limit or so? 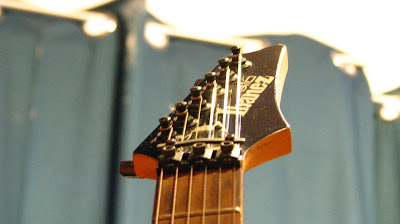 Honestly, I really learnt a lot during this elective. Not just the recording part, but I picked up a lot of new skills in playing the lead guitar.

Previously all the songs I played were just some fast riffs and short solo without so many techniques involved. But as for this song, even though it doesn't sound fast, but what lies beneath it is the emotion. It is the emotion expressed on the fretboard which makes the song sounds so mellow. As to achieve this, the bends and vibrato are really, really important.

And of course, the fast alternate pickings. 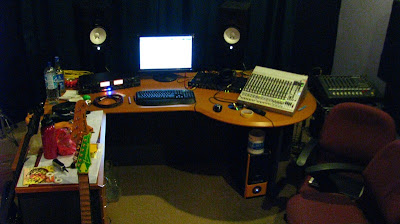 There will be no more elective after this for the rest of my life.

Music is something I really like, which unfortunately I have to sacrifice with due to my tight schedule. But now this elective has given me more than enough time to enjoy in this hobby, until I got bored of playing it. Playing the same song for 2 - 4 hours a day for 3 weeks is quite stressing by the way.

I feel like performing this song for next year's music night. May need a rhythm guitarist, bassist, drummer and keyboardist. Anyone interested? Chris, David, Eugene, Ellice?
Narrated by Mike at 15:26