I have just turned the "Gunpla pwned" links into "Gunpla reviews" links. A list of Gunpla that I've assembled and reviewed (roughly). I don't write extensive reviews on each kit like how other people do. Mainly just some opinions of me regarding the model kit. Sometimes I would give some advices, if I have any. But in fact I do need advices from the professionals instead.

The Perfect Grade Strike Gundam is still in progress. Currently main body is done and left the weapons. Once the assembly is done I will them apply the stickers and coating. Too bad my semi gloss coat has dried up, but the flat coat still there enough for the frame. Guess I'll only coat it after buying a can of semi gloss from KL. 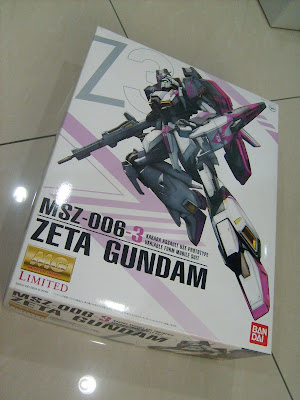 This was the 8th Master Grade that I bought, before Chinese New Year of 2008. The reason I bought this was not only I like it, but as to spend my free time during the break. Sigh, back to the days where I had plenty of time (compared to currently) and money.

This Mobile Suit does not appear in the TV series, but it does appear in one of the episode of Gundam Evolve as Zeta 3. 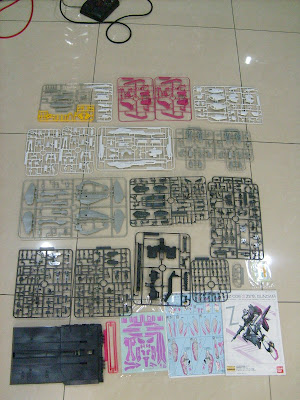 A variation from the Zeta Gundam Ver2.0. The title of ver2.0 is already a must to buy, since the overall quality of this Master Grade is well improved from the ver1.0 released 13 years ago.

The reason why I bought this instead of the original colour version was because, I am just sick of the "default" Gundam colour which is in blue, red, yellow and white. I already have 5 of them in such colour during that time.

Another reason is that, there's a word "Limited" written down there at the left corner of the box. Damn, I'm just such a loser for limited items. 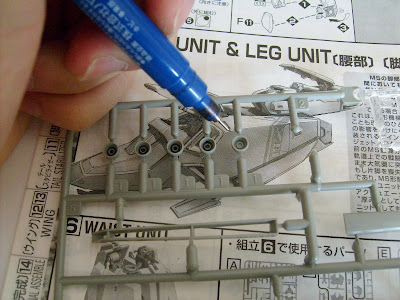 The construction was not simple. Being a transformable Mobile Suit, there are a lot of parts need to be assembled with extra caution. Once I complaint about Unicorn Gundam was hard to assemble due to its transformation gimmick. But someone has failed by statement by saying, "Wait til you assemble Zeta 2.0".

And now I've got the point. 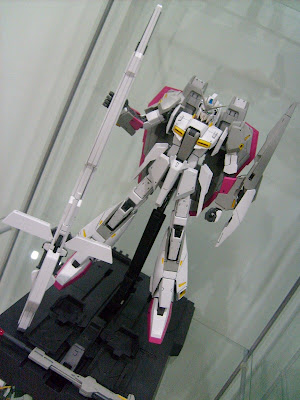 5 days of assembling and panel lining and finally it was done. That was the very first time of me spending so many days in just assembling a Master Grade. Other than the complicated assembling process, panel lining was the other pain in the ass because this suit is plain white and a lot of lining was required.

During that time, I did not apply the decals and stickers because I did not have any experiences in doing so. 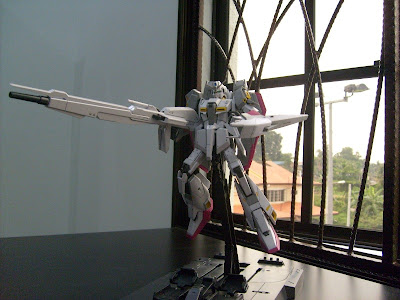 I was kind of happy on how the final assembling turned out to me, and I just stopped there.


Instead of continuing the touch up, I wasted quite a lot of time in figuring out the transformation process of the suit into Wave Rider mode. 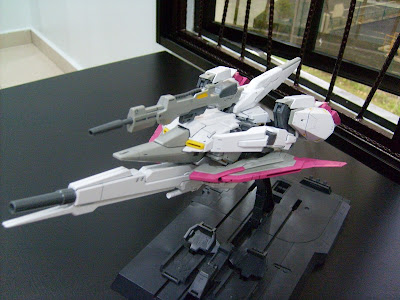 For the first time, it took me God damn 1 hour to transform it.

The transformation was just way too complicated and impressive. Really. And it hurts my fingers, too. 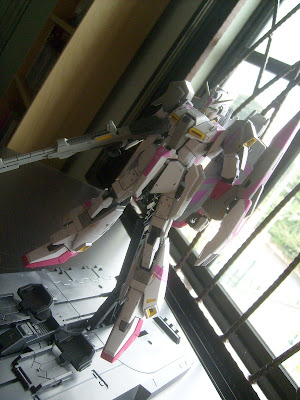 After buying a bottle of mark softener and a can of semi gloss top coat, I continued with this tanker.

And the outcome is even more satisfying. It definitely looks better with its complete decals and stickers on. 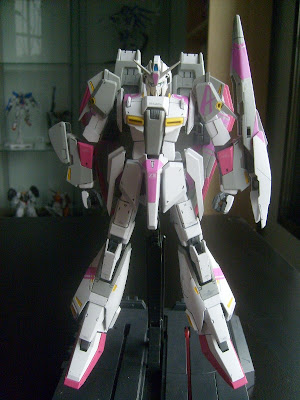 One thing that got me crazy was that the semi gloss coat dried up when I was trying to coat the inner frame and the weapons. Because I had used it for 2 SDs, 2 1/100 and 1 Master Grade. Therefore when it came to this Master Grade's turn, it dried up half way...

But anyway, I did not continue coating it even though I had bought new cans of spray later. Because I used water based coating for this, and the latter ones I bought were acrylic based. I'm not sure whether mixing it will cause any effects or not. 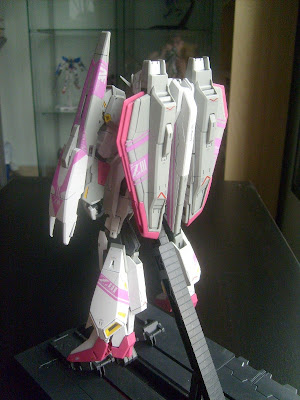 So I rather play safe, leave it until I buy another can of water based top coat, which is quite unlikely.

Another problem which I encountered was that some of the stickers, the big piece ones, adhere to the surface rather poorly. Especially at the edges, where it does not stick at all.

I can't do anything to it so I just leave it. I considered applying the cement on it but then again, too coward to do so. Oh well... 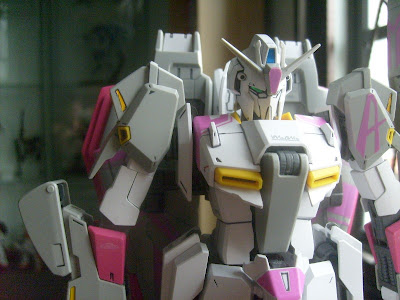 Once I have brought this Master Grade along with Unicorn Gundam to my Seremban house for display. There was this night before I sleep I got so bored and I took it to play around.

I was trying to transform it into Waver Ride form, and accidentally I broke the inner frame part of the right skirt armor.

That was still ok, at least I could glue it with the cement. But the worst thing is that, I could not find the broken piece when I bought it back home!

I asked KS to look around in my room but it was nowhere to be found. Therefore. I could only "hang" the armor on its waist now without any solid support.

Expensive lesson to be learnt - DO NOT play around with it. 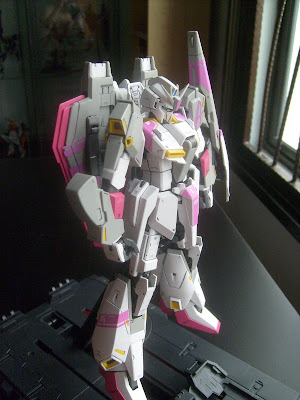 Very beautifully assembled, very nice review as well. I have one MG Zeta Ver. 2.0 yet to be assembled, and the many ABS parts, small ones too, are already giving me some worries ^^;

The first few photos of him without any decal looks very cool as well.

Sorry to hear about the broken joint. Every time someone mention the word 'break' when it comes to Gunplas, I would go "Ouch" instantly ^^;

i guess all of us has certain level of sensitivity when we come across the word "break". T.T

I like this Zeta design a lot. I even feel like getting the GFFMC Zeta plus, but price of RM700+ really turns me down.

Currently I have just finish my PG Strike's assembly. Waiting for myself to get a semi gloss. My first PG!

wow very nice... actually i just buy this model too, and i love it so much. can i ask u something? applying decal first or spraying the clear first?

Some will spray before they apply decals. but personally I'd prefer decals first then only spray. Mainly is because I believe that the decals and stickers adhere better to the unsprayed surfaces. Correct me if i'm wrong. Until now i still practice the decals+stickers then spray sequence.

But then again from what i've read from dengeki hobby magazine, they always coat first before they do weathering, which may be followed by decals later on. So i guess it doesn't really matter which ever come first...

Hi, wow this other version kit looks amazing too!

I was wondering. I am building the kit at the moment but the abdomen part is really really stiff! I am so afraid to move it because it looks like the inner part is splitting apart when I try to move the abdomen parts when transforming. I pulled very hard to separate the abdomen but it just doesn't move anymore. Help!?