I thought that I'd spend less once I moved on to clinical school. But I didn't.

Year 2009 was non productive. I did not fix much gundam plastic models because I told myself I shall spend more time for studies. But instead, I bought a lot more of those which are fixed, completed models.

Now it's time to summarise all the stuffs that I've bought throughout the year. 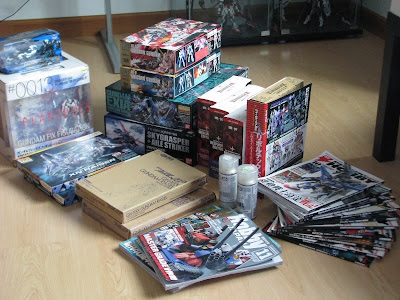 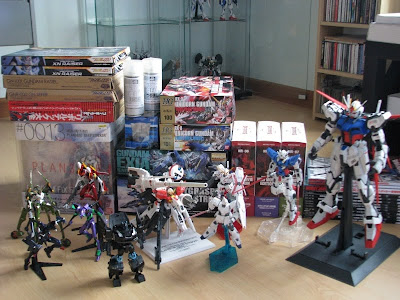 Great. This is totally out of my expectation. No wonder I'll never have enough of money to buy a new electric guitar and new effect processor pedals.

Not that I don't like them though, I really hoped that I didn't buy some of them. Not only I need to cut down my spending, I also need to invest on something more rewarding, like a new guitar mentioned. 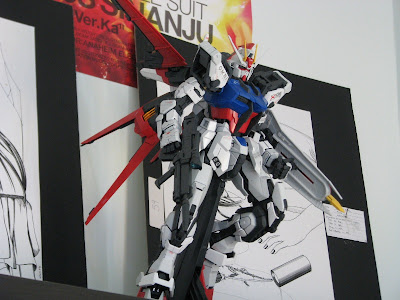 I bought the PG Strike Gundam last year, but only bought the PG Skygrasper and completed them this year. It's great. But I only display it with the stand outside the glass cabinet when I'm at home during the holidays. It's usually placed in the cabinet with Katoki stance. 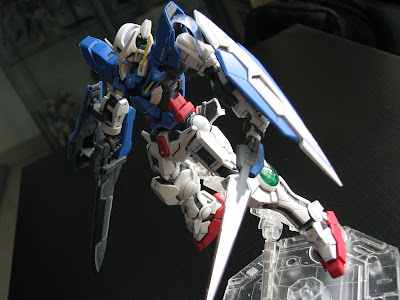 The second gunpla of the year was the MG Gundam Exia. I have the 1/100 scale ones but this MG version of it is worth getting. I've to say it's one of those non UC MG models that I really like. But somehow its instability and light weight really put me down. 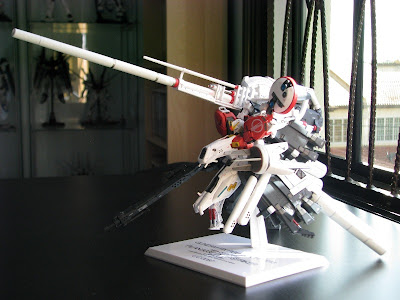 The Gundam Fix Figuration Deep Striker has to be my favourite of 2009. It's one of those "Suddenly acquired figurine" where I didn't expect to encounter. I went to lowyat for computer stuff but because of fate I spotted this GFF which was out of market for years and the price offered was before the rise of japanese yen.

My second and yet biggest Fix Figuration (this thing is really huge), as well as the second most model I've bought so far. But yet, it worth the money. 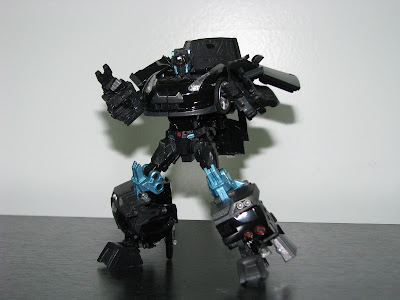 I'm not a huge fan of trasnformers, which do more good than bad since being a gundam fan is already malignant enough. But anyway I'm a die hard fan for Nissan GTR. This Nissan GTR/Convoy from Takara caught my attention long ago but I didn't get it during its first release, so I missed the silver version.

The second batch release was this black version, which turned out to be muscular too so I smuggled it when I bought the MG Gundam Exia after my End of Semester 7 exam. Initially the PG Astray Red Frame was on top of my list but still, spending RM800 for another Perfect Grade in less than a year's time is kind of difficult for me... 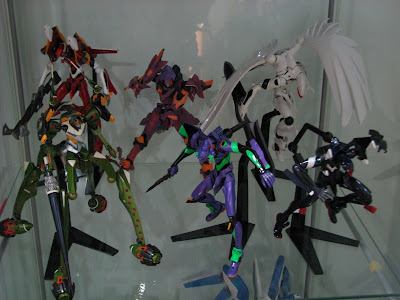 The revoltechs for Evangelion 2.0, Eva 01, Eva 02, Provisional Eva 05. New sleekly design, improved articulations, close to perfect metallic paint finish, and a bigger, cooler box. I already have the Evangelion 1.0 version but these new ones are quite a good purchase.

But unfortunately, the one which I liked the most, the Eva unit 01's shoulder blade peg was broken when I was playing around with it. Not even 24 hours since open box. Eva 03 was a tough get where it only came with a book, which I travelled down to KLCC's Kinokuniya after class, by train! I have even written a quick review for it, before I write one for the rest. 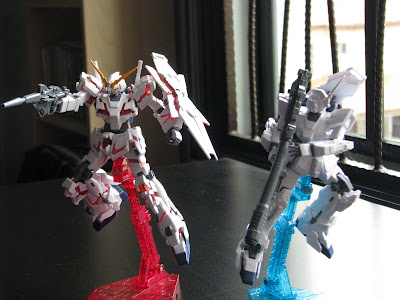 The HGUC Unicorn Gundam and Destroy Mode Unicorn Gundam are my most recent loots. I actually wanted to buy the MG Astray Blue Frame Second Revise or the HG 00 Raiser with GN sword III but both of them were out of stock. So I had to pick up the third choice which were these 2 HGUC.

I liked the MG Unicorn but it is too fragile and too complex so I thought having it in both HGUC format would be a good choice but heck, it turned out to be a disappointment, the worst purchase of year 2009. I shall quite up a review for them since I have already done the shots.

2010 would be a good start, because there are so many to get. I might get some, or all of these;

Okay, there's a hell long of list. But the first 3 are compulsory.

Wow! That's much! I now understand why I always out of budget, but all I know I'll stop collect next year from few months till my SPM is over. XD

wah ah mike ah...i thought you said you want to cut down ! I think you never will leh even till you old.what more after you start working, sure your spending go crazy

freedomwen: i actually visit the model shop less, but each time i go i buy more, sigh.

Chan: i actually cut down already man. but i don't spend on tech stuff, other than the new hp and new sony walkman, that's it. u crazy bastard, samsung OMNIA II, PS3, that is even more insane right? i want ur ps3!!

who say i got ps3??? I say I wish I had it. My housemate has a PS3, but to be honest I never play anything. Scared addicted. Btw I think the Strike was the best model of it all, others not so worth buying, compared to the strike, its really nice.

Love to see what comments you have with the HGUC Unicorns. Most of the reviews online are praising it over the MG, but as no gunpla is ever perfect these two smaller cousins do have their shortcomings...

merry christmas by the way

chan: u were talking bout dreams come true so i thought u bought it... if u really had it, i afraid that u will become like someone u told me >.<

eleven: yeah, i nvr been so disappointed over a plamo. Maybe i was comparing too much to the HGUC Nu, which was way more detail and stable. these PS cap jointed unicorns will come out just like that!