Sometimes, things are better if they are unplanned.

Day after our Surgery exam, a batchmate of mine asked me if I'm interested to go Malacca for a one day trip on that day itself.

So rush and so last minute? I declined. Because I had arranged a replacement for case presentation session with an external surgeon, which he had cancelled before that. So on that night I would need to go to the ward to prepare for the case presentation the next day, thus I could not make it for the trip.

But in the end I still joined, after sorting out the duties among my group members. 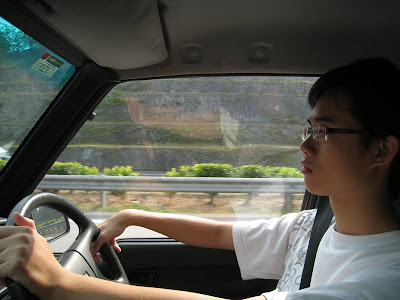 One thing which gone screwed up is that some of the group mates had decided to go back hometown without telling me. In the end, some of my group mates had to go to the ward at 6.30am the next morning to clerk patient.

Because our case presentation was at 7.00am sharp. Sad case.

What worse is that even the posting leader skipped the case presentation that I arranged with the reason of waking up late. So in the end we only had 6 out of the 9 of us during the presentation. 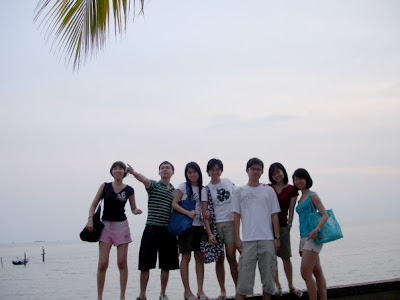 Alright, skip the screwed up things. With my constant speed of 100km/h, we reached Malacca in 1 hour and then another 30 minutes to reach the town.

The S2 fellas been there before years ago with another batchmate from Malacca locally. Thus they still somewhat remember the directions.

Somewhat... So we decided to ask for direction from the tourist centre and get a map. The map helped us in someway in reaching the places that we were heading. 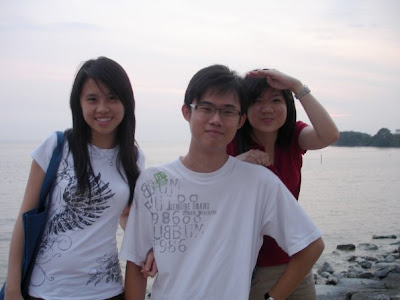 The beach was not facinating, guess it was not meant to be a beautiful spot to enjoy with. It was near sunset when we reached there, so we managed to take some lame posing photos with the peaceful background.

Everyone stood up high while I remained on ground level. Finally the S2 fellas get to stand slightly taller than I do.

By the way, the title S2 was given by none but me. Abbrevation for "short-short" actually. 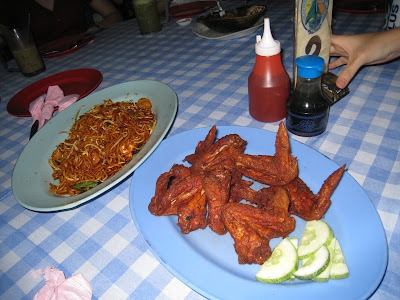 The beach mentioned was our first stop for our dinner. I'm not sure what is that place called but it's something like portugal village, where a village is inhabitted by the portugueses?

This place is said to have affordable yet delicious food which I agree with to some extend. In my humble opinion I'd say the food wasn't very special, but it was pleasent enough to enjoy with. 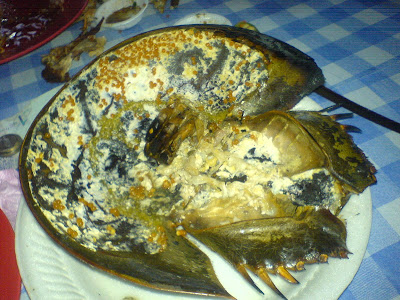 I have no idea what this seafood (above) is called in English. For someone adventurous like William it definitely intrigued him to try.

I shared with with William and I have to say that this seafood is totally crab.

I ate quite a lot of it regardless its funny taste and psychosomatically, it gave me a stomach ache after that. 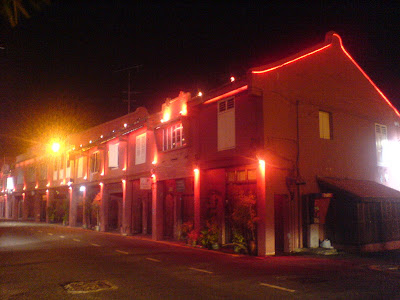 After the dinner, again with map we were trying to look for a restaurant which sell pork satay.

Pork satay? I had never even hear or think about it. Sounds quite interesting but we had a hard time in locating the restaurant.

But somehow, during the process of tracking this treasure down, we came across this beautiful scene, the Eye of Msia! 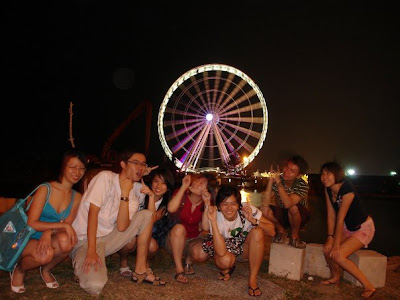 Erm, we didn't know how to drive across the lake/river(?) at first, so we only took a few lame photos with it as a background.

The colour of this ferris wheel changes actually, which looked quite cool from far. Too bad it is just another piece of failed project by the gahmen in earning money.

After that we found out that the restaurant which sells pork satay was closed. Bad timing. 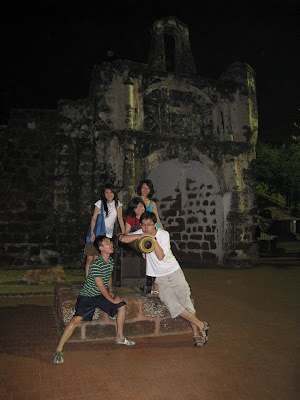 Anyway, we hang around the A Famosa after that. A very huge cannon you can see, and some of you might have seen how the cannon is utilised in some of my photos in my facebook.

The place got quite eerie at night where it was almost pitch dark.

We didn't go up to the top where the cemetery located. It was quite late already that time, or should I say too early to go to a cemetery? 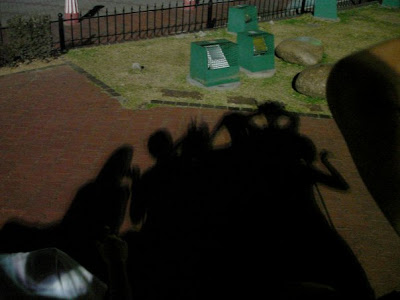 In the end we left around 1am after having Satay celup as a replacement for our pork satay.

Tracking the highway was not easy because the sign boards were just plain misleading. But luckily there was this Malay man where I found in the petrol station, guided us with his car to the highway.

After this man left, we still didn't see any sign of highway ahead. But from the middle of nowhere, this man appeared beside my car out of a sudden. He winded down the window and asked me to keep going and the road will lead me to the highway.

Surprisingly good person! Don't tell me that he got worried about us and chased us back to guide us again. I felt quite thankful for the people's kindness, because the whole trip was about asking for directions.

that thing is a horseshoe crab... so yeah... but seriously it smells like crap? I've never tasted it before, but I wasn't expected it to smell like crabmeat either... in fact I didn't know you could eat it hehe...

oic. i didn't know that it's edible too. it smells really bad, and the taste wasn't pleasant as well. To some extend the meat and yolk did taste like crab. if you were given a chance, would you try it? hehe

If I didn't have to pay a horrendous amount of money, probably... but if it really tastes like 'crap' then I'd rather save my money hehe...