You can called it as Chinese "Niu" year too, like how everyone of us abuse it, since it's the year of Ox which is called as "Niu" in Mandarin.

Yesterday was the first day of Chinese niu year, like usual we all gathered at my grandmother's place.

Last year my father called the lion dance team (for international readers you may like to learn more about lion dance here), but they did not show up in the end, because the manager had forgotten it!

But now this year luckily they did not forget about our call. They reached at the doorstep after our long anticipation. 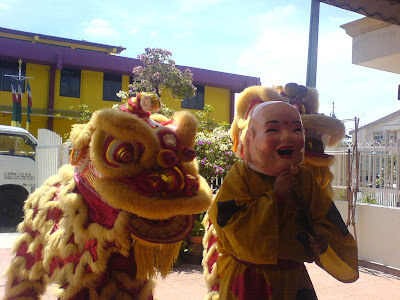 I'm not sure which organisation or which Chinese school this lion dance team are from, but the thing for sure is that these people were sacrificing their Chinese new year for the sake of the performances.

Some of the members' style looked very striking. Their extremely bleached and colored hair reminded me of those rebellious students in Japan. Maybe what appeared to be normal in other country not really applicable here, I think. 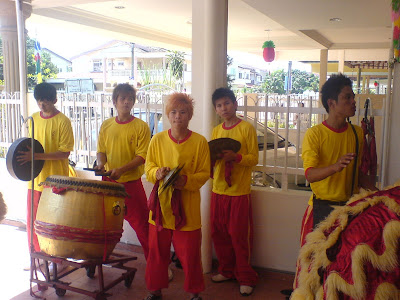 I have seen quite a number of times of lion dance, but nonetheless it is still very exciting. Once in a year only afterall. Taylors college does call lion dance team too, but I missed it twice last time.

The sound of the instruments act as additional wave to pump up your hearts. You can really feel the impact when they were playing. Very, very noisy.

My "band manager" Khee Chun always ask me to play lion dance drum on the standard 5 piece drumset, but the floor tom's tone isn't low enough for that, haha. 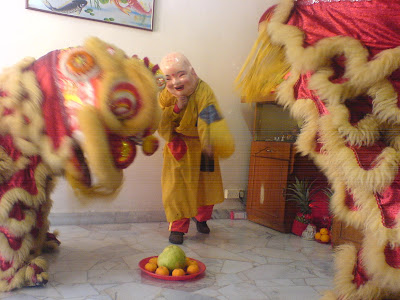 One of the parts during the lion dance in the house is the "fruit-peeling" act. So there was a green fruit which I don't know the name and a few tangerins in the plate. And the lions will sort of put them in their "mouth", digest it, and spit it out. 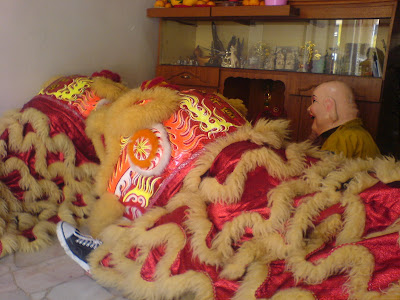 It was a long process though, because the fruits were manually peeled.

It could be quite worrying too, because you wouldn't know why it would take them so long. Possible that the lion dancers fainted in there due to suffocation, and people around will still stand there and wait. Few minutes after that, Da-dang! Peeled with flowerish arrangement.

As you can see, there are only 5 tangerins peeled and arranged. In fact there were more of them placed in the plate before that. In the end I found out that those MIA tangerins were discarded outside the house. 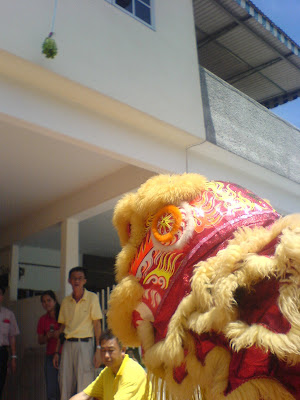 Final stunt would be the high jump to reach at the vegetable hung at, erm, 3.5 meters from ground?

The first jump was not successful and they attempted for the second time then they made it. The vegetable was hung too high above I guess? 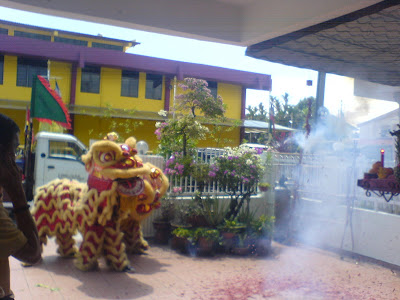 Finally it was ended with a blast. I mean, blasts. As you may know, the last blast is the most powderful one, but who knows the continuous explosion stopped right before the last blast.

The manager risked his life and lit for the last powderful firecracker. I could see the instrument team members were trying hard to "take cover". Even they also scared, so means that it would be super powderful!

In the end, it really did. I have never seen such powerful, powderful cracker get exploded right in front of me in such a short distance. The pieces blew all over the place in 360 degrees and some of them hit me.

Not painful, but the smoke released can really kill! A lot of them, including the team members were coughing. Some of them even nearly get an asthmatic attack. The gahmen shall consider in using this for riot control next time :) 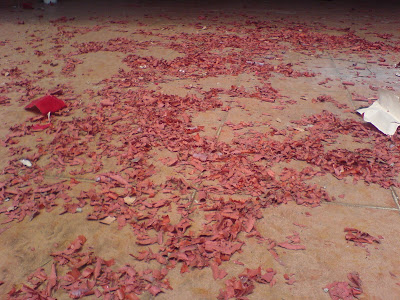 Happy Chinese New Year again people.
Enjoy your temporary break.
I need to continue my studies after the 3rd day. Surgery end of posting is next week, and theory paper is next!
PS: Actually the firecrackers were fake. Really fake one. Really!
Narrated by Mike at 21:00