There are a lot of friends of mine got married. Some called it as a next stage of life, but I'd call it as a contract for life, or a contract of life.

Irony enough, the first wedding I attend was the person, oh well, dumped. Oh yes, I did wish her all the best, and they live happily ever after (I guess).

Now this second wedding which I've attended yesterday was for a secondary school friend of mine named Rachel. Probably the first who got married in my class. Or maybe not, some of them might have already married, I don't know since I have lost contact to everyone in my class but except this bride. 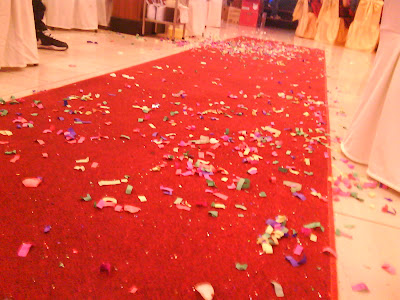 Willie, Clint and I, who were once classmate with Rachel went for the dinner. I wore exactly how I wear to hospital everday, minus the slacks replaced with jeans.

That time, we were asked to cover our drinks because those bursting paper pieces and gun powder. And unfortunately, we forgot to cover our bowls. But thankfully, the dinner was not served yet that time.

I've got a few pieces of those on my hair and face. 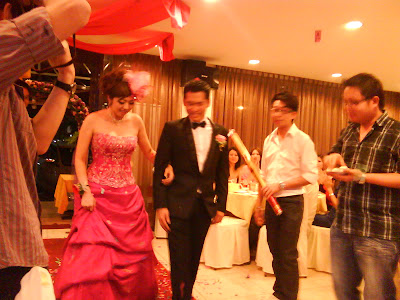 The bride and the groom. I don't know the groom though. That was the first time I've seen him. But I guess his a nice guy, because the dinner was grand enough.

Standard dinner which all of us have been through at least a few times in a year. But this dinner had something new - at least for me. They serve raw prawns. 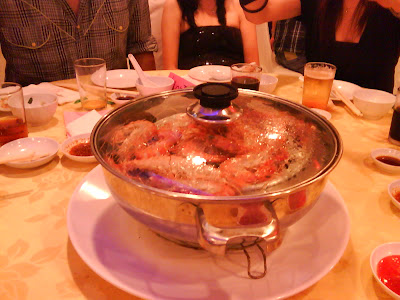 Not exactly raw until the waiter poured the soup onto it which then hot steam cooked the prawns in seconds, in the pot in front of us. They have hot rocks under the second layer of the pot which releases the heat once the soup is poured.

Very visually entertaining, and the prawn tasted fantastic. I guess we are kind of bored of butter prawn, dry chili prawn, therefore this "sauna prawn" would be something new for us. 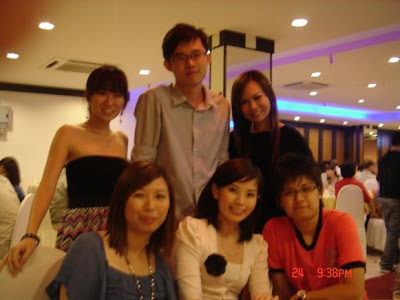 Like I mentioned, only three of us from her class went yesterday. Strange enough, there were more of them who went for the dinner, whom Rachel had some class with for a year during Form 1.

And all of them were my primary schoolmates. So it was like a primary school gathering for me too. I have totally lost contact with them, but I could still recognise some of them after all these years, like, 12 years? 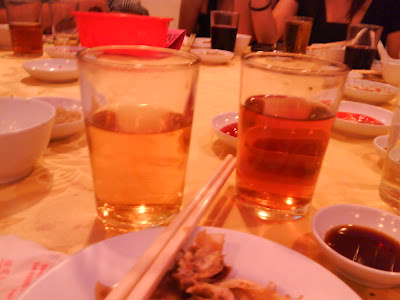 The red wine was just alright therefore I stopped after the third glass. I actually gulped the third glass so that I could have the Chivas. The first glass of Chivas was bad because the liquor lady poured in too much of water for me.

But it turned heavenly after the second and third glass when I request for 10% dilution. Chivas definitely beats red wine, and it looks like Chinese tea too.

I hope that the next wedding which I'll attend would be Willie's. Make it fast bro.