Ok, I voted for Earth.

But how the hell am I going to study if I don't turn on my lights? So I went to Jusco just now to have my dinner in Igentis restaurant.

I ordered my food then only I get my seat. Once I sat down only I realised the candle standing on the table. Damn. They are going to off their lights later.

In fact I wanted to study there during, and after my dinner, within the earth hour period. So my plan was ruined. After I finished eating, just nice the times was up. They lit the candes, and turned off the lights. 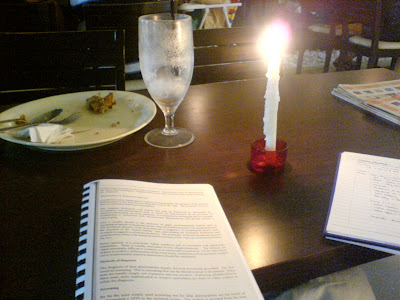 Failed to study, so I just pay my bill and left. So happens that the nursing students were there so I sat down with them and had a little talk. No, I only know the guy nursing student, I don't know the girls, really. Really one.

Then, I went home. Had alcohol withdrawal syndrome and tried to open my beer bottle. Paper and pen tricks did not work. Used my housemate's kitchen scissors and I broke the blardy handle. Argh. Sorry.

No beer. Luckily I walked back with a 1.5L of Tropica Twister orange juice and I brought some vodka here so at least I won't die. Too little I had and I nearly finish it while I'm typing this.

I only on my stand lamp just now. Just for a few minutes only though then the clock hit 9.30pm. Time for brightness again.

In fact, I don't think this earth hour thingy really help directly. I guess it's merely a form of awareness for the ignorant people around you and me in this country. No one gives a damn anyway in the end of the day.